A Lasting Impression in Time 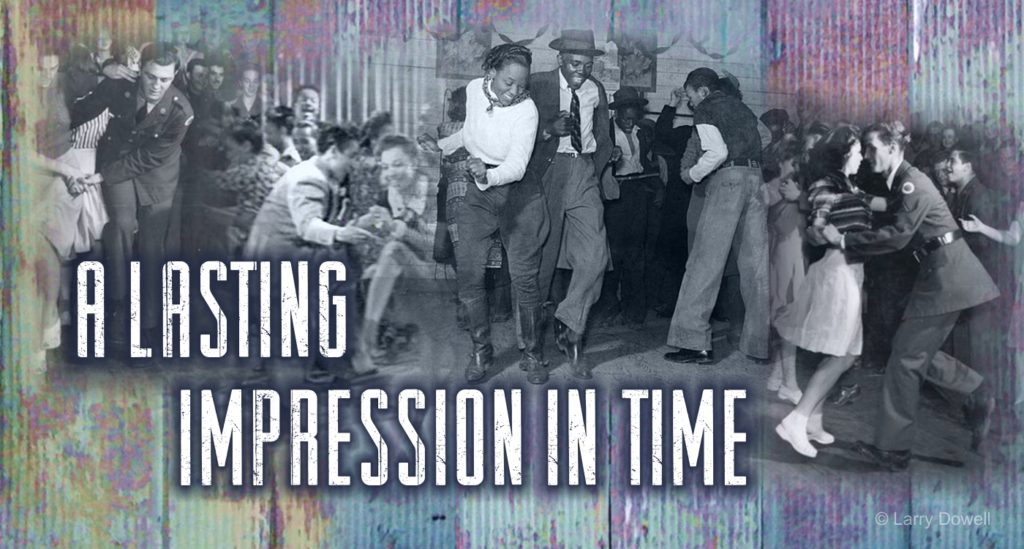 The lane was narrow and dusty. The fence alongside it was eight feet tall and made of corrugated tin roofing, painted long ago but now weathered and rusting. Layers of color showed through one another, cream and aqua green and pale blue. Weeds poked out from under the fence.

A WWII Jeep pulled up and parked. A sergeant jumped out, pulled open the tin gate and motioned the other soldiers to quickly get inside before they were seen. Soon after, a dark 1940s sedan pulled up and a man in a black suit and fedora got out and slipped through the gate. Next came a tall elegant Black woman in an evening dress in sumptuous shades of greens and blues and a dressy hat pinned in her hair, all straight out of the 1940s. She stood outside the gate a moment to gather herself and then pulled it open and stepped through.

Suddenly I was transported inside. It was a juke joint. The heat and the cigarette smoke were thick and music filled the room to bursting. A hundred people, packed shoulder to shoulder were moving to the beat. They moved as one, up, down, up, down, left and right. The band was crowded in the corner, the elegant woman’s rich voice giving the music a life of its own.

I could see and hear and smell and feel everything around me. I was there.

But I wasn’t; it was 70 years later and I was lying on a table with a row of acupuncture needles down either side of my spine and in my legs and arms, in a state of relaxation so complete that history had come alive around me.

After the session was over and all the needles were removed, I asked the acupuncturist if she knew anything about the history of that area on Brodie Lane. We had lived in the neighborhood many years and knew it had once been an historic Black community. That was all I knew.

She told me that the area was established by Thomas Kincheon in 1865 as a freed Black community. By the 1940s, it was home to many juke joints, famous for the jazz and swing bands that came to play there. During WWII, soldiers from Camp Mabry and other places would make the drive out into what was then the countryside outside Austin to frequent these juke joints.

I had only recently started using acupuncture; its therapeutic and healing properties quickly won me over. But being opened up to other realms of reality was surprising and unexpected. And that was not the only occasion; there have since been many others.

One time, there was an overwhelming smell of rain and wet dirt and wood. I was standing in the street as people emerged from their houses, looks of shock on their faces. The sky was black with clouds and there was a sliver of clear blue sky appearing on the horizon. The houses and buildings along the street were damaged and there were broken limbs and leaves everywhere. Buildings were still standing and roofs were torn but not missing, so there was probably a powerful storm but not a tornado. The people’s clothing and the cars seemed to be from the 1970s. Later I did some research and found record of a noteworthy Austin storm from that decade. On May 23, 1975, an intense storm with heavy rain, winds of 80 mph and large hail hit the city, injuring forty people, drowning four and causing $5 million in property damage.

Another time, there was a little boy playing under the table and looking up into my eyes as I lay face down. Then there were the half dozen Comanche calmly sitting on their horses, lined up by a dusty trail, waiting to meet someone. And there was the person with muscular dystrophy, their hand twisted out of shape, watching me to see what the acupuncture was all about.

The acupuncturist explained the heightened awareness was a result of the deep level of relaxation that came with the acupuncture. Although, she said, “Most people just see colors. You see spirits and history.”

I thought, “Great. I just want some healing relaxation. Alone.” But the curiosity is there now each time I go in. Who or what am I going to see next?

A Lasting Impression in Time