Each Time I Cast My Ballot

The War of 1812 is not as well known as the American Revolution. England didn’t want to give up its American colonies, so thirty years after she lost them, she tried to retake them. The English attacked from Canada, from the Atlantic, and finally from the Gulf of Mexico.

Fortunately, the United States had Kentuckians, thousands of sharpshooters who volunteered to fight the English in states far from their homes. Over 25,000 Kentuckians volunteered. It’s estimated that four out of every six men of fighting age in Kentucky fought in the War of 1812. Almost two-thirds of the casualties were Kentuckians. 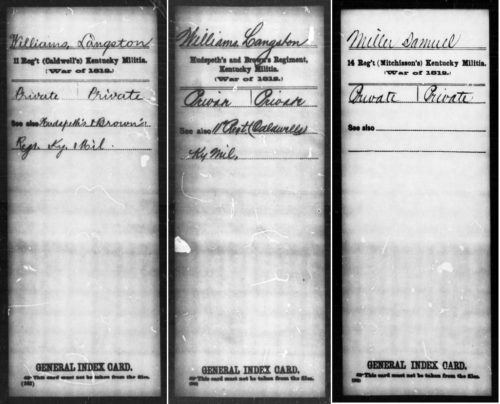 Samuel Miller served in Mitchusson’s Regiment of Kentucky Detached Militia at the Battle of New Orleans. Here is his entry in the Allen County Deed Book appointing his attorney to manage his service pay.

I Samuel MILLER of Allen County formerly Warren County Kentucky … appoint John WALES of Allen County and state aforesaid my attorney … receive my pay from the United States for a tour of duty under the command of Captain Thomas GRIFFIN in the 14th Regiment of Kentucky detached militia … Signed: Samuel MILLER

Even making the fifteen hundred mile journey to New Orleans was an ordeal. When the men rendezvoused on the banks of the Ohio River to make the long float from there down the Mississippi River to New Orleans, the boats that had been promised were not there. The Quartermaster bought whatever dilapidated barges he could find and the troops used axes and frows to cut and shape lumber to patch them. They had also been promised suitable clothing, blankets, tents, arms and munitions, none of which were available. Many arrived only with the clothes they wore and nothing else. They only had a half supply of rations and few pots or kettles in which to cook.

Despite all these obstacles, the Kentucky volunteers arrived at their destination and played a crucial role in winning the Battle of New Orleans.

Langston Williams served in Hudspeth’s and Brown’s Regiment, Kentucky Militia, for two tours of duty. He probably fought in the Northwest frontier, helping to recover Detroit and other cities from the English. To reach the frontier, he and his fellow volunteers would have had to march from the southern border of Kentucky north to Ohio, then cross Ohio northwards into Michigan and what is now Ontario, Canada. That would have been a march of well over five hundred miles, much of it along primitive roads and hunting trails. They would have had to hunt to feed themselves as they traveled.

The hardships these patriots endured to protect our country shames anyone too lazy or indifferent to even vote. Voting is a small effort that helps to keep the United States a nation of the people. Each time I cast my ballot in an election, I do it to fulfill my duty and commitment to our country and to honor my ancestors and their sacrifices.

Each Time I Cast My Ballot