My Grandmother, the Feminist 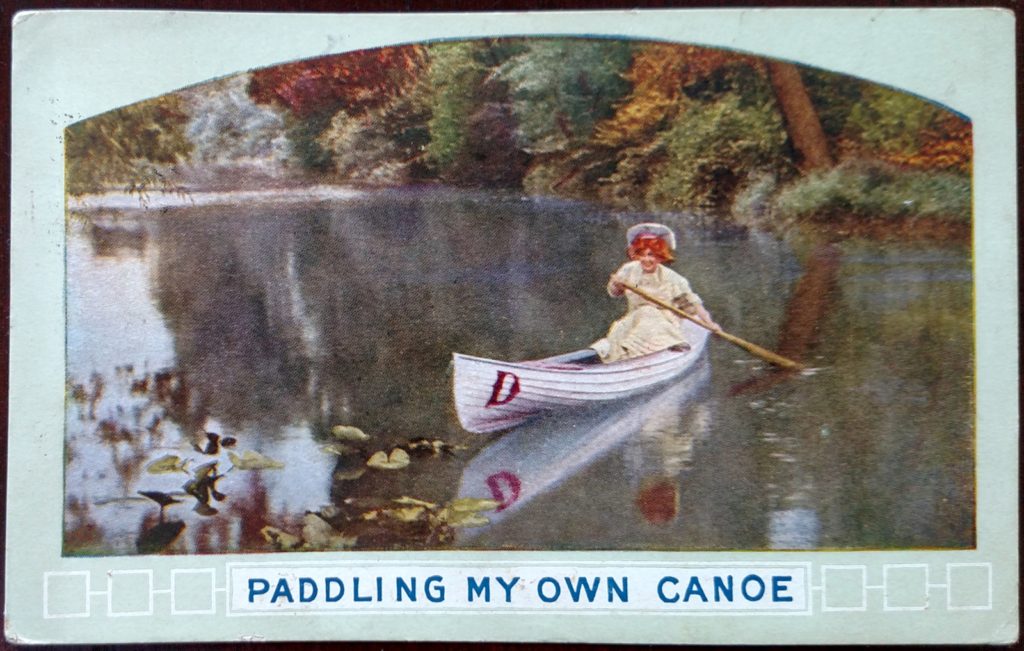 She was already quite elderly when I was born, so I only knew my grandmother as the sweet, loving and encouraging Grandma with the houseful of books, magazines and newspapers and my favorite candy always in the candy dish. I never knew the independent young woman she had once been, going out to conquer the world. Recently, I have started piecing together who that young woman was from papers and memorabilia she treasured from that part of her life. 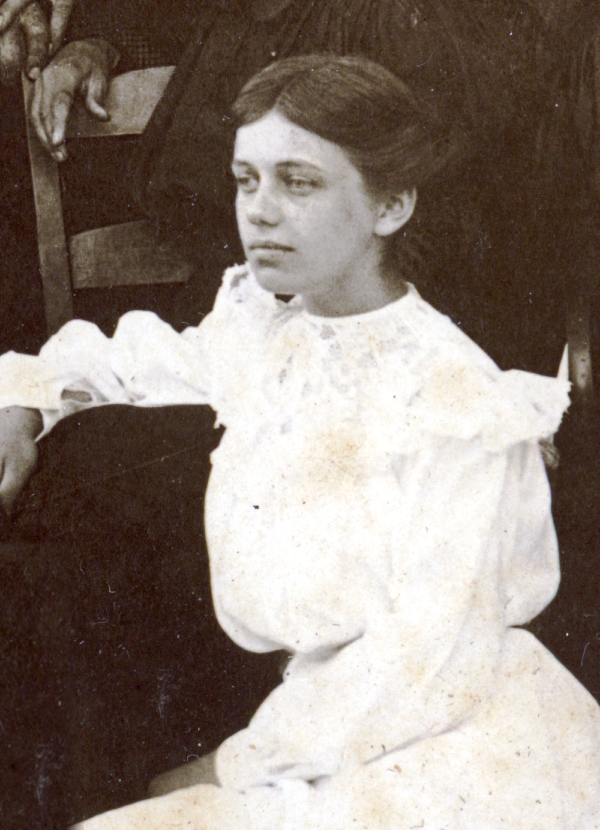 There is the postcard she saved from 1910, when she was a college student at Western Kentucky State Normal School, a teacher’s college in Bowling Green, Kentucky. It proclaims, “Paddling My Own Canoe.” I don’t know the significance of the big D on the canoe, but it looks prophetic now.

I have very little of the correspondence she wrote to others; most are letters and cards that were written to her. That correspondence probably tells as much about who she really was as her own writing might have. One very intriguing letter came in 1904 from a Mr. W. L. Sheppard, Sign Artist, in Gallatin TN, about 30 miles from where she lived in Scottsville KY. He wrote:

No doubt you will be somewhat surprised when you receive this letter from me, therefore I beg to explain. It was a mere accident that I came in possession of the egg bearing your name and address, and seeing that you were resident of “old Kentucky”, the state of my birth, and one that is indeed dear to me, as are also its people, especially the “girls”. The state which is justly noted for its fair women.

Therefore you will please pardon me for taking the liberty of writing to you, as it was a temptation that I could not resist. Wishing to satisfy my own curiosity and also for pastime I write you these few lines in an humble way, hoping that you may receive them in the same spirit in which they were penned. As to myself, I am 23 years old and unmarried (that’s not my fault) am tall have dark hair and hazel eyes. Awaiting a reply with much interest and anticipation. I am

I don’t have my grandmother’s letter to Mr. Sheppard, but his reply to her is very enlightening, gentlemanly and tactful.

Your most kind and affectionate letter was received a few days ago and was read with much pleasure. I was, to say in the least, very much surprised, but nevertheless agreeably so, for one would judge by your handwriting that you were considerably older than thirteen years. You did no doubt thoughtlessly write your name on the egg, but I am exceedingly glad that I came in possession of it. By the way, I also see that you are somewhat of an artist by the drawing on the egg. I am a great lover of art and like yourself, am very fond of flowers also.

Many thanks for the high compliment that you pay my writing, and in return allow me to say that you are the one who deserves it. It seems to me that I am the one who should take lessons in writing from you. Your penmanship is simply magnificent and would be a credit to several older persons with whom I am acquainted.

You say that you are a romping, fun-loving country girl. What a blessing, especially to one who loves flowers. How happy and contented you must be. No, I am not in the least disappointed, and shall ever remember you and shall always cherish the memory of you, a little Kentucky friend. Goodbye for this time and may the Lord bless you.

There is also the newspaper clipping she saved, The Reason Men Do Not Like Clever Girls. She was a clever girl; in 1910 she sent an inquiry to the American Book Company for the prices of Morey’s Ancient History, Morey’s Roman History and Morey’s Greek History. I don’t know if she ordered any of these, but I do have her copies of Milton’s Poems, Washington Irving’s Sketchbook, Tennyson’s The Coming of Arthur, and, most proudly, her copy of Manual of the Constitution of the United States, published by the American Book Company, over 400 pages and well used. 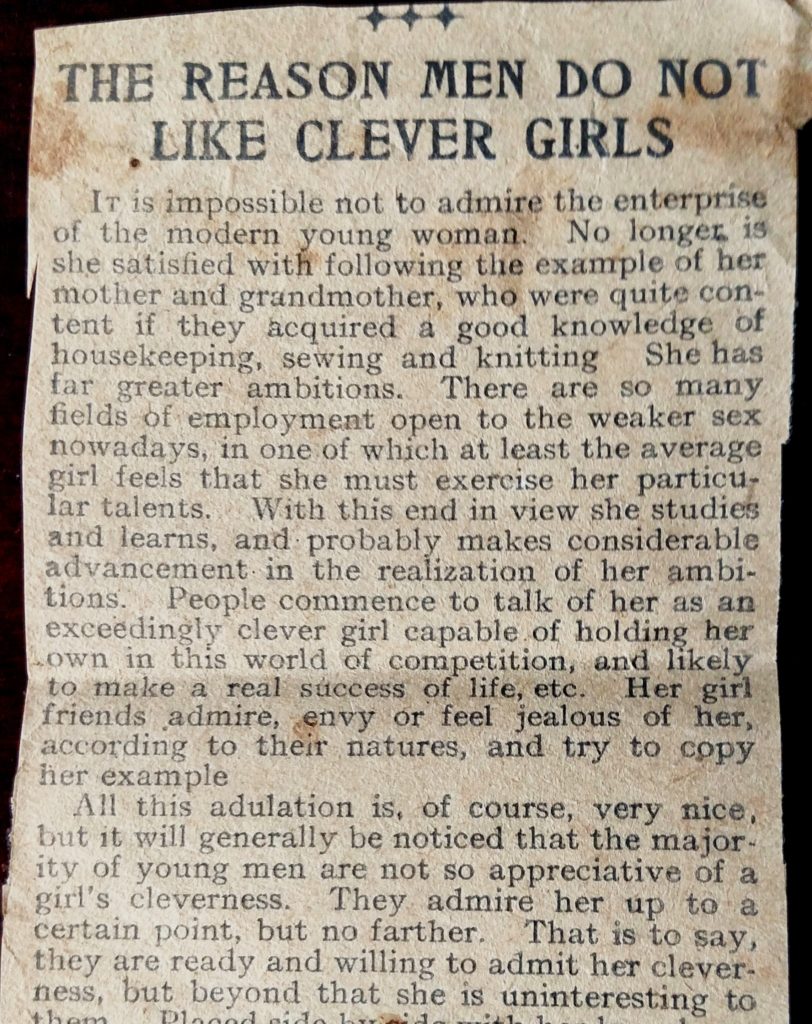 There are no papers or documents proclaiming that she was a Feminist. Still, she was a bright and independent young woman and she went off to college, not to learn household skills, which would have been the norm for the time, but to gain a higher education and to become a teacher. And she studied the Constitution, so she would have been very aware of the fight for women’s suffrage that was reinvigorated in 1910/11 in California and Washington.

For a young woman growing up in rural Kentucky in the early 1900’s, all this is even more remarkable. I know her parents were bright and loving people, for I have some of their correspondence as well, and they would have been proud of her independence.

I always felt a special bond with my grandmother. I still feel her near, even though she’s been gone for many, many years. As I learn more about her, I am proud to call her my Grandmother, the Feminist.

My Grandmother, the Feminist