A Lifelong Dedication to Voting 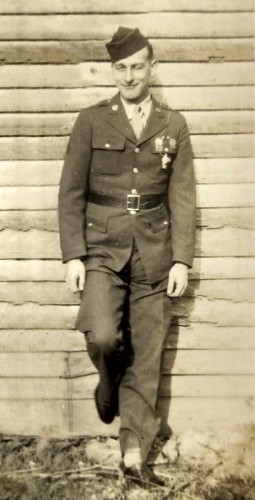 He volunteered for the Army in the early days of WWII and served through the end of the war. He served in spite of being partially blind in one eye and having both knees damaged by the soon outlawed duckwalk exercise during basic training and the botched Army surgeries afterwards that compounded the damage.

My father served in the US Army 8th Service Command based in Dallas, Texas, which covered Arkansas, Louisiana, Texas, New Mexico and Oklahoma. He was a Military Police, transporting prisoners of war by train all over the country. He visited just about every state in the country and probably had the network of rail lines committed to memory after years of travel. 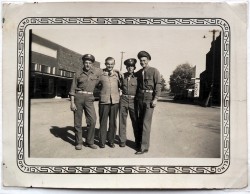 The German prisoners were probably glad to be far from the Russian front. They were housed, fed and well treated. My father talked of taking them out on fishing expeditions. He described one time when some of the POWs wanted to seine fish the nearby drainage ditch. As they waded along the muddy chest deep water, dragging the net along between them, they snagged something very large. What they eventually pulled out of the water was an eight foot long alligator gar. He said they never wanted to go back into the water after that.

After the war ended and the German prisoners were repatriated, he was sent with some of the first occupational forces to Japan. In Tokyo, he helped maintain order in the virtually destroyed city, where the city’s infrastructure was obliterated and everyone was starving. Some of the occupational laws he enforced were that no Allied personnel were to assault Japanese people or to take food from them.

My father was always hesitant in speaking about his military service. Much of what I know about it comes from photos, postcards and mementos he collected during those years. What I do remember about him is his dedication to our country and to the democratic process. He believed in the importance of voting, and voting in every election, no matter how insignificant, for he had served his country in the dire time of war to preserve those rights. And he had no regard for Republicans and their rhetoric.

I honor my father and his dedication by following his example. I vote in every election and encourage others to do the same. I see, as he did, how fragile our democracy is, and I will not let his sacrifices and the sacrifices of all who served during that horrific world war be diminished by complacency and disregard.

A Lifelong Dedication to Voting