The History Around Us 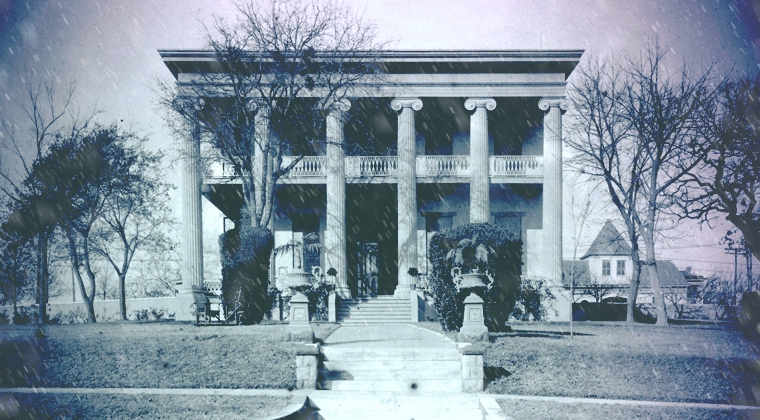 As I settled deeper and deeper into the healing relaxation of acupuncture, the air in the tiny therapy room chilled and the walls faded away. I was suddenly outside, standing in front of a house. It was a grand house, though not quite a mansion. It was only two stories high and the six columns on its front were much too large and disproportionate for the size of the house. It stood in the city, but there were no other houses close by.

Low gray clouds covered the sky. The air was cold and snow swirled in the wind. Further down the street, two women walked side by side, their dresses full and long and filled underneath with layers of petticoats. One dress was bright reds and yellows and whites and the other was a rich green. They had thick shawls pulled close around them. The style of their clothing looked to be from the 1890s.

Directly across the street from the house squatted two Black men dressed in work clothes. They talked between themselves as they patiently waited in the cold. They were not allowed to approach the house to do their work until their overseer came by to shuffle them in and watch over them as they worked. They would be arrested as criminals if they entered the house unsupervised.

I was seeing history come alive around me. This might have been alarming, except it had happened before during acupuncture sessions. The deep relaxation of the acupuncture was like meditation, opening a new level of awareness, seeing and feeling the history of a place, which endures after time moves on.

Since my acupuncturist is located in what was once the historic Black community of Kincheonville south of old Austin, I assumed that one or both of the Black men I saw had lived in Kincheonville and traveled up to Austin to work. I was seeing a bit of their own history that had been indelibly tied to the place where they once lived.

When I got home, I googled ‘1890s house in Austin Texas’. There it was. I had not recognized it. The Texas Governor’s Mansion is very different now, hidden behind high walls and fences and trees, with extensions and additions tacked onto it as it grew into a true mansion. The old photo that the search had found showed only a large square house with an oversized portico standing forlorn in its large yard. But it was unmistakably the same house that I saw.

It’s remarkable that these imprints of history persist, that they’re out there ready to be discovered. The acupuncture had brought the level of relaxation and awareness needed to see them. They’re unexplainable, but they are undeniable, especially when so vividly experienced.

The History Around Us